We could not be more satisfied to let you know that Momentum Agency And Fireball Whisky is presenting :

For the first time we have the honour to host Luca.

Luca Bacchetti, originally from Italy, is now one of the
world’s most sought-after DJs and producers.
At first, he gravitates towards
Hip Hop and Black Music generally, but soon falls in
love with emerging sounds such as Drum’n’Bass
(jungle) and all the mid-nineties urban styles. The
terms ‘eclectic’ and ‘multifaceted’ are often used
inappropriately but, given the variety and breadth of
his musical background and development, in Luca’s
case there is no better descriptions.
In 2002 he starts to frequent recording studios and
produces his first work in 2004, furthering in the
meantime his involvement with House and Techno.
As a producer he begins to develop a creative vein
for what is to become Minimal Techno. 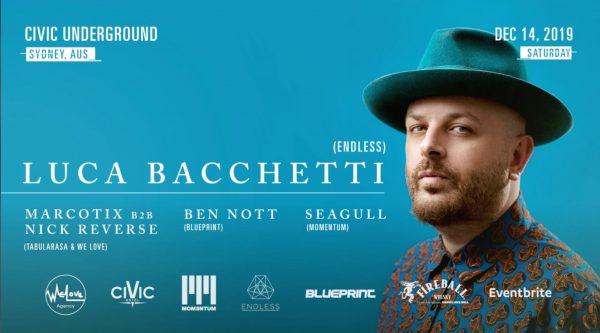 Back to All Events

Jump on @fireball_au to check out the parties and antics the Cinnamon Prince has been up too.

The FYRBUS in all its glory. Have you seen it at t

FIREKEG is back baby! This isn’t a drill and the

Who's frothing over our mate @leekernaghan droppin

Would ya look at the Fireflaps on this bloke?! Fir

Join the Fireball Family and receive HOT AF updates on events, competitions and epic new merch for your rig!